Char-Broil Charcoal Grill – Know Your Fire Before You Begin 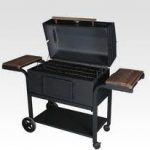 Most girl and boy scouts learned safety rules of how to start a campfire. They also learned basic elements of how fire is ignited and how to safely keep it burning for campfire cooking and to keep their campground warm at night. These fundamentals are just as important for individuals who love outdoor grilling. Just about anyone can learn how to start a small grill fire to make delicious char-broil meals. It’s interesting to note that this is also a very good way to reduce energy costs. What’s most important is to know your fire before you begin any grilling.

What Is Char-Broil?
Char-broil is simply broiling foods over a charcoal grill. Broiling is a way of cooking foods over an open flame. It can be done indoors with a kitchen broiler or a convenient portable broiler or outdoors on a grill over charcoal briquettes. The difference between indoor broiling and char-broiling is simple. Indoors, foods are placed on a large sliding broiling pan that has a grilling plate with large holes to allow juices to drip into the pan beneath. With a charcoal grill, foods are broiled over charcoal while juices fall below to the charcoal and the lower attached grill drip pan. The real difference between the two, however, is flavor.

Choosing Your Char-Broil Charcoal Grill
Today, there are a number of different types of charcoal grills. Some require nothing more than charcoal and starter to begin char-broiling. Others are fueled by propane in small tanks. The classic way to grilling is a simple grill where small, aged wood for burning is used as fuel. The wood is allowed to burn down to smaller briquettes while the aroma of the wood permeates the char-broiled foods. Mesquite, apple, nut and cherry woods are the most popular woods for enhancing the flavor of meats, poultry, fish, vegetables and fruits to be broiled over an open fire.

Steaks, Ribs, Chops And Poultry – Char-Broiled
Steaks that are char-broiled sing with the flavor of outdoor cooking. It’s hard to resist a juicy steak char-broiled on the grill. Be mindful of the temperature of the charcoal for ribs, chops and poultry. Depending upon the size of the ribs, chops and poultry, the broiling time will vary according to the temperature of the charcoal. One suggestion with these foods is to char-broil first and then allow them to rest on the upper rack of the grill while the rest of the meal is broiling. This insures perfect doneness which for pork and poultry is essential to avoid undercooking and possible illness from bacteria.

Char-Broil Your Seafood
When attempting to char-broil seafood, look for fish that will broil quickly at a high heat. Char-broiling fish is a great way to enjoy seared or blackened fish outdoors without the annoying smoke that accumulates in an enclosed area.

Char-Broil A London Broil Or Roast Beef
Char-broiling a London Broil on a grill is a perfect way to insure that your final result will be meat tender, juicy and rare on the inside and browned on the outside. It’s also simple to char-broil roast beef on your grill. Be aware that you will have to turn it as it begins to broil on each side. There’s never been a more flavorful way to serve your guests roast beef. Serve with grilled vegetables and the meal is complete.

Char-Broil Your Entire Meal
One tip to char-broil an entire meal is plan ahead and purchase only the freshest ingredients needed for grilling. Allow at least a half hour for your charcoal to set at the right broiling temperature. To properly flame-broil your steaks, add moistened wood chips like mesquite and allow a small flame to rise. Then, quickly broil steaks on both sides to seal in juices. This works well for guests who prefer their steaks rare or medium rare.

Anybody can afford a BBQ to cook their food outside. However, there…
Briquettes are an excellent source for BBQ flames. By using briquettes instead…
Cooking outside always has the element of ‘back to nature’ even in…
The Old Days Of Messy Grills and Flavorless Foods Are Quickly Disappearing…