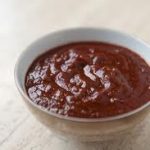 Barbecue is an art form rooted in local variations. It is best experienced by sampling distinct tastes among regional inventions. Kansas City-style barbecue is a variation on the art form every barbecue lover should know, not only because it spawned a revered barbecue scene made up of over 100 restaurants and several large barbecue festivals in Kansas City, but also it should be experienced simply for its remarkable taste.

The taste of Kansas City Barbecue is the result of a well-honed process dating back to the early 1900s. Local barbecue enthusiast Henry Perry is credited for developing this process in his Kansas City barbecue pit where is rumored to have used newspaper pages to wrap choice meats. His experiments grew into the taste we call Kansas-City style barbecue.

Slow cooking meat for customers on Kansas City sidewalks is the method Henry Perry perfected so many years ago. We tend to call Kansas City’s slow smoking method “traditional” in the 21st century because it has been so widely loved, then adopted, by regions everywhere including nearby barbecue mecca Memphis, Tennessee.

Using a selection of different woods, barbecue is slowly brought up to a sublime point, then painted with just the right balance of tomato based sauce. Laced with a blending of sweet and spicy flavor which defines the Kansas City-style barbecue sauce, the result is a recipe that finds a perfect match in the taste of meat smoked over woods in slow motion.

Some barbecue establishments across the U.S. discard the burnt ends of barbecued meat or barely give these ends any thought, but not in Kansas City. Burnt ends, edges of meat seared by smoke and heat, are the cornerstone of Kansas City-style barbecue. After all, you might as well take full advantage of wood smoked meat and the distinct juxtaposition that occurs during this cooking ritual.

As the ritual of barbecue travelled throughout the United States, regions, cities and towns took pride in concocting their own specific barbecue tastes. This is the folklore of barbecue and makes it a special food. After sampling Kansas City’s famed barbecue, head over to St. Louis for another legendary variation on barbecue as an art form. Once you have learned the differences and similarities of those neighboring metropolitan barbecue centers, hop on over to Memphis, Tennessee and learn more.

Sure, you can open a bottle of commercial barbecue sauce and brush…
It’s impossible to understand the taste and style of Memphis barbecue without…
Part of the enjoyment of barbecuing is creating your own rubs. A…
There is nothing better than home-made barbecue sauce, and almost everyone who…