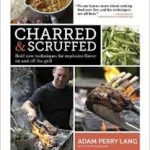 Adam Perry Lang, one of the world’s most renowned chefs and foremost expert on everything BBQ, has written and released his third cookbook called Charred and Scruffed, which features 280 pages filled to the brim with recipes and innovating cooking techniques.

What is Found in Charred and Scruffed

For starters, one of the twists on modern cookbooks that Lang offers up in Charred and Scruffed is the fact that it’s not a cookbook entirely centered around new recipes. While recipes are obviously the main factor, the very first chapter opens up with a number of new and enticing grilling techniques that will help everyone that reads it gain some new insights on how to grill the perfect piece of meat. Many of the recipes contained within the cookbook are focused on meat, fish and poultry, though there are a myriad of portions that adequately describe new techniques called scruffing, clinching and cooking high and slow. Some of the last sections of the cookbook focus solely on how to add more flavor. Lang describes how to flavor the meat with textured condiments, finishing salts and dressing. Even included in the cookbook is a chapter dedicated to side dishes that go well with the main course recipes that comprise the rest of the cookbook.

There are a rather large number of positives associated with Charred and Scruffed. The most important aspect of any cookbook is the strength of their recipes, and in that regard, Charred and Scruffed far exceeds expectations. The recipes are inventive and create delicious meals. You will find that you are able to create the perfect crusts for your steaks and the most exquisite techniques that will allow you to bring out more flavor in the meat than you had previously thought possible.

It’s also quite nice that the first chapter is meant as a sort of introduction for new, and even experienced, grillers by including Lang’s building blocks to grilling, which are seasoning, controlling the heat and adding extra layers of flavor. The pictures contained within the cookbook are extremely detailed and crisp, allowing readers to follow the recipes with a greater ease than if the words were solely what was displayed.

While there are a plethora of pros within the cookbook, it’s not without it’s share of negative aspects as well. For instance, a number of some of the more advanced recipes within the cookbook can’t be completed without the usage of a dehydrator and convection oven. While many grillers may indeed have access to these items, there are many that will not, which could prove troubling for those that may want to experiment with all of the recipes found within. It’s also worth mentioning that many of Lang’s recipes go into great detail, and while most can be easily understood, this cookbook may not be for those that want to create a quick meal on the grill and be done in 15 minutes.

Another small negative, which is actually derived from a positive element, is that some of the recipes and techniques don’t quite go into enough detail. Adam Perry Lang has crafted some techniques and recipes that are truly revolutionary to the art of grilling and have never been done before, but without more intricate details in some of those techniques and recipes, it can be difficult to replicate them to produce the same result. That being said, most of the recipes and techniques within the book are detailed well enough.

Charred and Scruffed is easily one of the best BBQ cookbooks available, if not the absolute best. While it is not without its fair share of problems, there are more than enough delicious recipes and completely new grilling techniques to make this a cookbook that is highly recommended. In fact, after reading it, you may find that grilling will never be the same.

Most people like having choices in any situation, and choices in grilling…
If you don’t have a Big Green EGG—the plump, cheerfully indented, bright…
Chef McPeake’s Backyard BBQ: The Art of Smokology is a best-seller that…
The Weber 386002 Q 100 Portable Propane Gas Grill is ideal for…