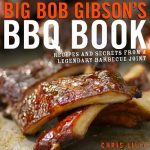 Lilly’s Great Grandfather opened up a legendary BBQ join in Decatur, Alabama in 1925. Since then, legendary and now world-famous recipes and techniques have been closely guarded and passed down through the family business. The secret is out now and is in black and white for readers to absorb.

Big Bob Gibson’s BBQ Book: Recipes and Secrets from a Legendary BBQ Joint is packed with recipes for dry rubs, glazes, BBQ sauces, various cooking techniques including slow-cooking and traditional grilling, ideal BBQ sides, and much more. Lilly also dives into the history of his restaurant and the history of BBQ and grilling themselves.

Big Bob’s BBQ Book will teach the average BBQ griller the techniques and information needed to become a Pit Master. Things like ensuring that one’s BBQ sauce is white and not red, which is a big deal to locals in Decatur who really know their BBQ. The Deep South has always been a place where anyone can find legendary, great-tasting BBQ. With this book, legendary BBQ has the chance to spread to the far corners of the country.

Lilly discusses the process of making great-tasting and world-famous BBQ from start to finish. He also discusses various types of grills and grilling set-ups and cookers. Lilly covers choosing the ideal wood for certain situations that will allow an average griller to achieve a BBQ masterpiece. He covers seasonings and “fixin’s” as well.

In the opening pages of the book Lilly explains the timeline followed to maintain a double pit BBQ set-up. He goes on to describe his upbringing and the process in which he learned to BBQ from his elders. Lilly does a great job of proving to the reader that he’s not just an average BBQ enthusiast. He and his elders have fine chiseled this art to an exact science, and Big Bob Gibson’s BBQ Book shares this science with all who are interested in one of the staple food groups of this country; and yes, BBQ is its very own food group.

Fall, Winter, and Spring are long gone and it is Summer now…
Smoke and Spice: Cooking with Smoke, the Real Way to Barbeque is…
The Cuisinart CGG-200 All-Foods 12,000-BTU Tabletop Propane Gas Grill is an excellent…
The Primo Oval XL Grill comes from a company that puts hard…